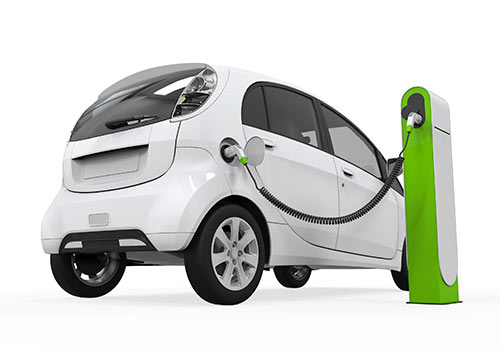 Our utility is leading by example in the area of green vehicle technology. Through our support for the use of plug-in hybrid electric vehicles (PHEVs) and neighborhood electric vehicles (NEVs), we have made a commitment to reduce environmentally harmful exhaust emissions.

What is a hybrid?

HEVs have smaller engines than conventional cars. The vehicles store and use electricity generated from the gas engines, reducing the amount of gasoline needed to power the vehicle. The engine also generates power for the electric motor and is capable of recharging the electric motor’s battery at higher speeds. Therefore, the regenerative features of the car make its use of gasoline more efficient, extending the miles per gallon and reducing emissions.

How do hybrids work?

The electric motor of an HEV handles normal stop-and-go travel and initial highway acceleration. When the vehicle hits higher speeds, the gasoline-powered engine kicks in.

The HEV’s battery feeds power to the electric motor and is able to recharge when the vehicle is coasting and braking. The power-switching process the vehicle undergoes between the two types of engines enables the vehicle to use less gasoline and reduce pollution.

What is a PHEV?

Using the same technology as standard hybrids, a PHEV is a hybrid that is fitted with an additional battery, allowing the vehicle to be recharged from a standard 120-volt electrical outlet. The battery takes approximately five hours to charge in a standard outlet, which would cost the average electric customer less than 50 cents.

How is a PHEV different?

Both standard hybrids and PHEVs are powered by a combination of electricity and liquid fuels; however, PHEVs draw their charge from the engine and captured brake energy, as well as from the electrical grid when they are plugged into an electrical outlet. PHEVs also have a set of batteries that provide electricity to an electric motor, allowing the battery pack to be even further recharged by “plugging-in.”

PHEVs have traditional fuel tanks and internal combustion engines, so they do not face the range limitation of electric-only cars. PHEVs can travel up to 30 miles on electricity before using the standard, gas-electric operating system and get up to 100+ miles per gallon.

What are the benefits?

What is a NEV?

NEVs are compact vehicles designed to be used in residential areas with low density traffic and low speed zones. With a top speed of 30-35 mph, low-speed vehicles can be used on streets with a posted 35 mph speed limit or less. When driven on public streets, a driver’s license is required. The green vehicles are powered by rechargeable batteries and electric motors. Depending on the size and options, a full battery charge will take between 8 to 10 hours.

Yes, there are many models of PHEVs on the roads today. There are also many conventional hybrids, from sedans to SUVs, that have been converted to plug-ins. Some are getting up to 60 all-electric miles per charge.

How much gasoline does a PHEV use?

According to the Electric Power Research Institute (EPRI), half the cars on U.S. roads are driven 25 miles a day or less. Consequently, a plug-in with a 25-mile all electric range could eliminate gasoline use in the daily commute of tens of millions of Americans. Furthermore drivers of PHEVs would only need to fill up with fuel a few times a year, versus the current 24-36 times a year on average.

No. They have essentially the same accelerating power and speed capability of current hybrids.

How much more will a PHEV cost than a conventional hybrid?

On average, the cost of a PHEV battery adds about $2,000 to $3,000 to the cost of a conventional hybrid. Find more details about PHEVs here.